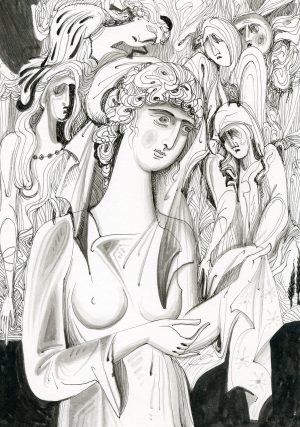 THE NATURE OF THINGS

FROM THE CREATION OF EROTOKRITOS TO ITS DIFFUSION AND RECEPTION

STEGI VITSENTZOS KORNAROS happily announces that the International Conference “The Nature of Things: From the Creation of Erotokritos to its Diffusion and Reception”, which is to be organized in Sitia from the 22nd to the 24th of July 2022, will be held under the auspices of Her Excellency the President of the Hellenic Republic, Mrs. Katerina Sakellaropoulou.

The support of the President of the Hellenic Republic to the cultural work of STEGI VITSENTZOS KORNAROS is a great honour for Crete, for Sitia, as well as for the organizers of the Conference.

Stegi Vitsentzos Kornaros will be hosting an international conference, namely: “The Nature of Things: From the creation of Erotokritos to its diffusion and reception”, as part of a series of scientific meetings organized on the subject of “The poetics and the reception of Erotokritos”. The conference is to be held in Sitia, between the 22nd and the 24th of July 2022, with physical attendance of the participants, and it will be focusing on topics concerning: a) the literary qualities of Erotokritos, as documented through the sophisticated discourse between the poet and European Literature, shaped under the influence of Greco-Roman tradition in the years of Early Modernity; b) the radiance of the Cretan Renaissance and Erotokritos in cultural environments where Kornaros’ poem, as well as the Hellenic culture, played a significant part in the forging of the particular Modern Greek cultural character from the 18th century to the present day.

The main subjects of the conference will be:

Stegi Vitsentzos Kornaros ensures the organization of the conference proceedings on the whole, during which all health protocols in effect at the time will be followed.