Vitsentzos Kornaros, a Greek poet and one of the most illustrious representatives of the Cretan Renaissance, descendant of a Hellenized noble Venetian family, identified as the son of Giacomo Cornaro and Elisabetta de Mezzo, was born in Trapezounda, Sitia, Crete in 1533. He moved to Candia (modern-day Heraklion) in approximately 1590, where he married, fathered two daughters and took up an administrative office. His brother, Andrea, also an author, was the founder of the Accademia degli Stravaganti, in Candia, of which Vitsentzos became a member.

His most distinguished work is Erotokritos, a romance in verse, comprised of 10.012 rhyming fifteen-syllable verses, which was first published in Venice in 1713. The religious drama The sacrifice of Abraham is also attributed to Vitsentzos Kornaros by some researchers. He passed away in 1613 or 1614, in Candia, from unknown causes, and was buried at the Catholic monastery of Saint Francis. 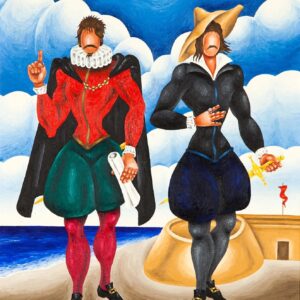 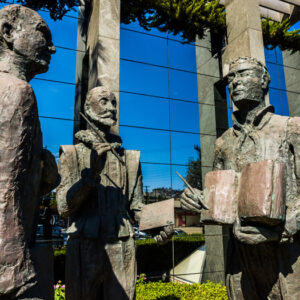 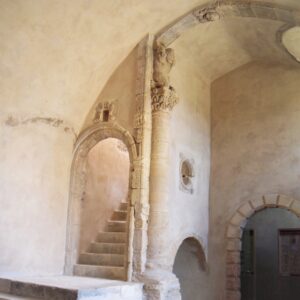 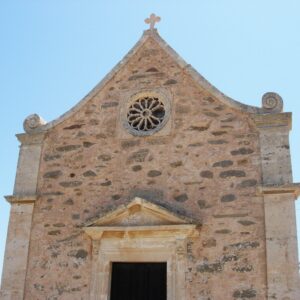 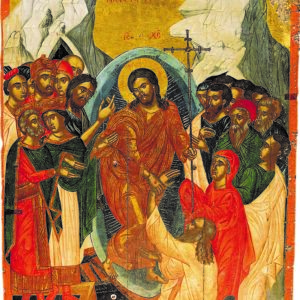 From the 13th until the 17th century, Crete was a meeting point uniting the East and the West. One of the results of the productive coexistence of the Greek culture, that lured many of the scholars of Constantinople after its conquest in 1453 by the Ottomans to the island of Crete, and the Venetian culture, which was shaped by the Italian Renaissance between the 14th and the 16th century, was the Cretan Renaissance, which is placed from the 15th or early 16th century until the Ottoman conquest of Crete in 1669.

Greek Cretan noblemen were able to speak and write in Italian, travelled to Italy and were also educated there, and led a Western way of life, while many Venetian Cretans by this time spoke Greek and had adopted a Greek lifestyle. Greek typographers in Italy began to systematically publish Greek vernacular texts as early as the late 15th century. A well-respected circle of Greek and Venetian nobles that had a classical education, an artistic perception, scientific knowledge and a humanistic philosophy made Crete known as a centre of education and culture, and managed to diffuse the Greek literature and art in Europe. A significant intellectual life was evident, especially in urban centres, a fact proved by the presence of the Academies founded by scholars who wished to study philology, philosophy and history, as well as to cultivate literature, science and the arts. The Accademia dei Vivi was founded in 1562 in Rethymnon by the mathematician and astronomer Francesco Barozzi; the Accademia degli Stravaganti in 1591 in Candia by the historian and writer Andrea Cornaro; the Accademia degli Sterili in approximately 1637 in Chania.

The Cretan Renaissance assimilated the European -mainly the Italian- Renaissance model, and integrated these cultural elements to the intellectual and cultural tradition of the island, usually surpassing in quality the direct or indirect archetypes. This new cultural movement in Crete thrived in literature, more specifically in poetry and theatre, as well as in the arts, such as architecture, sculpture, painting and music. The influence of all creative fields of the Cretan Renaissance was crucial to the shaping of the Neo-Hellenic intellectual and artistic world.

Having stemmed from the Byzantine tradition and the European medieval poetry, literature in Crete grew in quantity and quality during the Renaissance period, with a remarkable flourishing of theatre. Most of the texts of the time were written in rhyme, demonstrating a unique mastery in the use of the poetic metre forms. The significance of these works was enormous, given the fact that they actually helped to shape a literary language based on the Cretan dialect, and were very popular among the Greek-speaking public.

The most important works of the high Cretan literature and theatre period are the tragedy Erofili by Georgios Chortatzis, the comedies Katzourbos by Chortatzis and Fortunatos by Marco Antonio Foscolo, the pastorals Panoria by Chortatzis and Voskopoula by an unknown writer, the religious drama The sacrifice of Abraham and the verse romance Erotokritos by Vitsentzos Kornaros. A noteworthy example of vernacular prose is the variation and translation of Varlaam and Ioasaf by Nikiforos Venetzas, while the most significant work of the era written in Italian is Historia Candiana by Andrea Cornaro.

Cretan architecture in the 16th and the 17th century developed its own morphological features, having assimilated the theoretical ideas of the important architectural treatises written earlier in Italy. It also acquired necessary know-how from the extensive fortification and city planning works designed by the mechanics of the Venetian administration in Crete during this period, and incorporated the “all’ antica” aesthetics of the craftsmen who materialized them. The flourishing of architecture in the Renaissance and the diffusion of Mannerism is captured in the imposing fortifications that can be seen today in places of strategic importance such as the walls of Candia and the forts of Souda and Spinalonga, as well as in brilliant public buildings in the urban centres such as the Loggias in Rethymnon and Candia, and in private residences, churches, aqueducts, roads, fountains and other constructions throughout the island.

Religious painting in Crete had already acquired a particular character in the 15th century, following the Byzantine tradition and having adopted a series of selective elements from Italian painting. Especially in the art of portable icons, it adapted to the needs of the mixed audiences of Crete, featuring talented and resourceful painters who were able to express themselves in both the Byzantine, a la greca, and the Italian, a la latina, style, adopting a mixed idiom. These painters led the Cretan school of iconography to an impressive bloom, producing works of art that were very much in demand in Western Europe in the 16th and the 17th century.

Amongst the most illustrious artists of the time were Angelos Akotantos, Andreas Ritzos, Theophanes the Cretan, Michail Damaskinos and Georgios Klontzas. Domenicos Theotokopoulos (1540-1614) also originated from the Cretan Renaissance, given that he began his distinguished career as an apprentice painter in Crete; later on, in 1567, he left for Venice and then for Toledo, where he became well known as El Greco.

The Cretan Renaissance in Sitia

Despite the rural character of the Cretan countryside, the noblemen of Sitia, at least during the 16th and the 17th century, were in direct and constant contact with Candia and Venice. Families such as those of the Kornaros, Salomon, Barozzi, Demezzo, Barbarigo, possessed private libraries, called in highly educated scholars to Sitia to work as home-tutors, studied in Italy, were well aware of the advancements in literature and art, and took an active part in the intellectual life of Crete and Italy. Sitia of that particular period also had highly educated and distinguished clerics, such as Meletios Pantogalos, bishop of Ephesos (1631-1639) and his brother Gabriel Pantogalos, abbot of the wealthy then, materially and spiritually, Monastery of Panagia Akrotiriani (Toplou).

Erotokritos was the most significant creation of the Renaissance in Sitia, thought of and written by Vitsentzos Kornaros. Historia Candiana (History of Crete) was the only voluminous work produced in Crete; it was written in Italian by the most prolific writer Andrea Cornaro, brother to the poet of Erotokritos, and it was the first historical, political and archaeological geography that bore witness to the ideological ferment of the Cretan society.

The developments in architecture and sculpture are evident, though rather simplified, in various fortified residences in the area of Sitia, for example in Voila, Zou, Mouliana, and in certain church structures, such as the Holy Cross (Timios Stavros) in Toplou Monastery. A remarkable example of this is the villa Demezzo in Etia, where the new morphological style was applied, bearing references to mythology and the Classical architecture.

The poet of The Sacrifice of Abraham?

The religious drama The sacrifice of Abraham recites a well-known incident from the Old Testament, that of God’s testing of the faith of Abraham (Genesis XXII). This work is believed to have been written at around 1600 (between 1586 and 1635), in the Eastern Cretan idiom, and consists of 1144 fifteen-syllable rhyming verses. The story begins with the appearance of an angel to sleeping Abraham, and is followed by a dramatic dialogue with his wife, Sarah. It continues with the preparations for the sacrifice and the three-day walk to mountain Moriah, at the foot of which Abraham asks his two servants to wait, wishing to walk alone with his unsuspecting son, Isaac, to the summit. Then Abraham’s prayer and trial, his redemption and the sacrifice of a ram instead of Isaac follow. The story ends with the happy announcement of the return of father and son and their warm welcome by overwhelmed with grief Sarah.

The sacrifice of Abraham was published in 1696 for the first time, soon to become a very popular read, judging by its repeated publications. According to Ioannis Mavrogordatos, the religious drama Lo Isach, rappresentazione nova by Luigi Grotto (1541-1585), first published in Venice in 1586, influenced the creation of The sacrifice of Abraham. The Cretan work, however, far exceeds its model in creativity, introducing certain novelties: It is not divided into prologue, acts, scenes and chorals – it is a unified text; it introduces internal action; most importantly it approaches human characters in a different way: In The sacrifice of Abraham, characters come from all walks of life, and they are thinking personalities with sense, will power and emotion. The making of their final choice, which is reached after a dramatic inner struggle and a procedure of taking control over contradiction, becomes an act of testing of faith and a result of conscious choice.

The characteristics of language and verse affiliate The sacrifice of Abraham with Erotokritos, the most significant work of Cretan literature. The similar ways of expression, certain lines that can be seen identical in both texts and the attempt to surpass the Italian model, had led researchers (S. Xanthoudides, L. Politis, E. Kriaras) to the conclusion that the poet of The sacrifice of Abraham is Vitsentzos Kornaros. However, recent systematic research has proved the aesthetic criterion rather weak, and has shown that a further study of the deeper structure of the language, the ideological background and verse morphology of both works is needed, questioning the creation of The sacrifice of Abraham by the poet of Erotokritos. 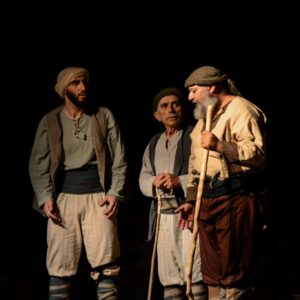 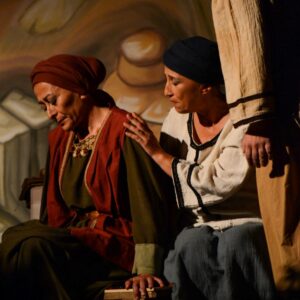 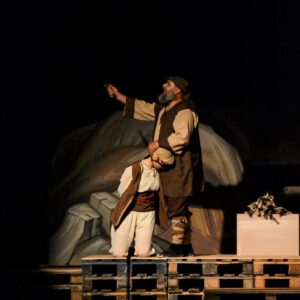